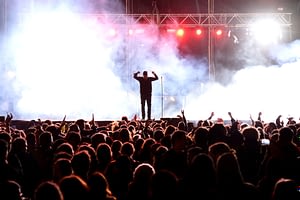 That’s enough. I’m not going to type it anymore.

You know the line, but you probably don’t know the movie. At least I hope you don’t, because that would make two of us. The movie is called Network, but that’s not important. What is important is how you deliver your most powerful lines.

Would you recite your “Mad as hell” line with your ankles crossed while reading off of a giant index card? How about turning your back on the audience and reading the slide on a giant projection screen? Just thinking about it makes me bored as hell, and I’m not going to take it anymore.

Your presence on stage matters just as much as the message you deliver. Body language, gestures, and movement add impact to your speech when they match your message. Just like your walk is your signature, your movements add style to the substance of your stories.

Think of your stage as a flower garden. You set the scene so that each space on the stage represents a physical location or a place in time. If you walk through your garden, you trample the flowers that you planted. However, there are ways to write material that matches your body movement, so that you can move naturally on stage while making a point.

Do you like to pace back and forth when you talk? If you do, you’re probably going to move around on stage. That’s fine if you do it right. Too much movement without a purpose can make you look like a caged tiger. Poorly timed movements remind your audience of that Herbie Hancock video from the 80s. With the right preparation, you can sync your movements to build suspense to a main point, perform dialog between characters, and travel through time.

If you ever watch Chris Rock do stand-up comedy, you’ll see that he paces. A lot. In fact, he does more than pace, he speed walks across the stage. He keeps moving so the audience will keep their eyes on him and away from their cell phones. He can get away with it, because his frantic delivery style matches his movement. Another reason that it works is that he is building to a climax. I can watch Chris Rock on mute and know that once he stops moving, he is delivering the punchline. He knows how to tailor his comedy to his tendency to walk laps around the stage. You’ll never hear Chris Rock deliver Rodney Dangerfield-style one-liners because he would have to stand still for too long. Rodney barely moved at all. He would take one step to his left, deliver his punchline, fix his tie, and go back to center stage. If you know that you like to pace when you talk, longer stories give you some leeway to walk across the stage and build to a conclusion.

If you act out a conversation while on stage, you can move in order to represent both people speaking. There is always a funny story about a conversation between a trainer and client that you can act out. As you move back and forth between the two spots on stage, the audience can envision the two people talking and satisfy your need to move. Keep in mind that when you use dialogue between two different people who are looking at each other, you need to turn to the audience every few lines to narrate what they are watching. For example:

“Mike! I gained six ounces yesterday, and you promised that I was going to lose weight!”

“Well, Janet, the weight you gained was pure intellect. You still look great.” (Turn to the audience) “Should I tell her that I saw her outside the bakery yesterday?”

When you act out dialogue, only turn 45 degrees so that you are facing the other character and still maintaining contact with your audience. When you switch characters, you simply shift your weight and turn your head to the other side. A full turn sideways looks awkward and cuts off your audience.

Your stage is a physical timeline. As you tell a story, chances are you are covering different points in time. As you transition from the past to the present and on to the future, you can stand in different places on the stage to represent each time frame. Be careful with this technique. Once you have established that three paces to the right represents the past, you can’t walk across it if you are talking about the present.

Remember that your left is your audience’s right. Move to your right (their left) to talk about the past, and your left for the future.

The suspense, dialog, and time travel usually stimulate lateral movement on the stage. To pull dialog from your audience, you cue the people that it’s their turn to contribute by moving forward toward them. A simple question, whether rhetorical or one that requires an answer, draws them into your experience. Check the blog post on Concept Check Questions in order to find creative ways to engage your audience with questions.

Draw the curtains, curse the glare

Before you take the stage, practice in your living room, away from the mirror. Watching yourself will force you to stand still, even if you naturally like to pace around. Just walk around the room and let your message flow. Force yourself to stop when you deliver a punchline. Turn side to side as your rehearse your dialogue. Find spaces that represent places in time. And occasionally, turn to your invisible audience to soak up the applause and laughter. You will never believe the audience reaction when you match your movement to your message.