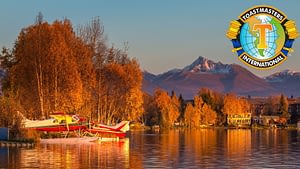 I had just gotten my first apartment. No more roommates, dorms, or barracks, just me, my four walls and my empty refrigerator. I needed to parlay the milestone with another major step in my life. I moved into the apartment on May 1st and went to my first meeting on May 3rd. I didn’t know much about the organization.

All I knew was that if you ever found yourself on stage, Toastmasters would make the difference between champ and chump.

The 14-story Frontier building in midtown looked like the Empire State Building as I pulled into the parking lot. This must be what it’s like to go on stage to give a speech, I thought. The walk to the building, the elevator ride, and the death march to the conference room took far longer than any walk to the stage and added to the jitters.

I don’t know why I was so nervous. After all, I knew the building well. I had an office there -- where I installed the furniture.

This time I was there on business. As I pulled open those heavy double doors to the conference room, I soon found that I had no reason to worry.

“Heyyy, welcome!” said the first smiling face that greeted me. I felt like Norm walking into Cheers for the 5ooth time. From that day until I moved out of Alaska, I never missed a weekly meeting if I was in town.

For your experience to be as good as mine was with Greatland, you have to choose the best club.

My absolute worst experience was at a state-run utility company. That day the club was celebrating their anniversary and had ordered some food. I didn’t know anything about the special event, as I was only a visitor. With just two dollars in my wallet, I handed over what little I had at the club’s vice president of membership’s insistence in exchange for a charity plate.

Mind you that as a club member I have paid for plenty of guests to eat whenever we brought in pizza, snacks, or a birthday cake.

The meeting carried on with the efficiency of any meeting run by state bureaucrats who hate their jobs until his excellency, the company’s president showed up.

“Let’s get something straight,” he said as he burst into the conference room. “Everybody here works for me, right?”

He didn’t even know what Toastmasters was but he decided that since it was carrying on in his building, he wanted to observe. After standing in the back and watching what was left of the meeting, Mr. (name withheld, but let’s just say his name rhymes with a word that describes him well) decided to lecture the group about what they really needed to know about public speaking.

He left us with a message that everyone (except the lowly visitor) was to get back to work immediately, and an indication that Toastmasters would have served him well.

This is why choosing the right club is so important. The wrong experience might chase you away from the organization forever. Had this been my first experience with Toastmasters, I would have never gone back to another meeting.

I have belonged to three clubs and visited about a half dozen more, and can tell you that not all clubs are the same. A club typically meets every other week, though some meet every week and others just once a month. They also vary between morning, noon, and evening clubs. Aside from the scheduling, the real variety lies with the attitude of the club.

If you visit the Toastmasters website, you will see that they promote a formal business image. The organization brands itself with the allure of executive leadership, but the reality in the meeting is much different. People come from all professions, and for a variety of reasons. In fact, a club full of members focused solely on professional advancement and not personal growth is usually a very boring club. I was installing office furniture at the time that I joined, and a year later I was the club president.

You want a club that is professional, but not too formal. You know that a club is well organized pretty early on in a meeting, as they follow a system but are still willing to deviate from it. A good club cares more about getting its members in front of the room than it does about following parliamentary procedure. You want a club that is big enough to offer variety, but not so big that you will never get a chance to speak. Although you want a club that welcomes you, be careful about a group that is too eager to have you join.

Most literature that you see about Toastmasters raves over the experience, and rightly so. The semi-annual dues and bi-weekly meetings are the smallest investments of time and money that will ever do so much for you. Just make sure that you choose the right club based on schedule, rapport, and opportunity.

If you’re tired of dozing off in front of PowerPoint slides in a conference room and can’t wait for your turn, then Toastmasters awaits you.